09 Dec Learn More About Yourself and Your Mental State

Posted at 08:46h in Stories by Abbey Dufoe 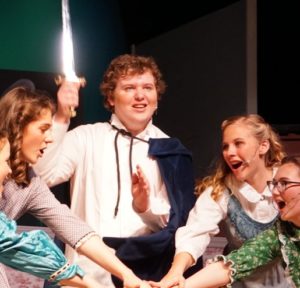 As I put on my cap and gown for my eighth grade graduation from Catholic school, I wondered what my future would hold. I was entering public school. I had been telling myself for months that not going to a Catholic high school would be beneficial. I knew the Catholic Church’s stance on homosexuality and experienced it first-hand. I needed freedom. I needed a space that would allow me to be who I am. I chose a public school, much to the dismay of my classmates, and my future was sealed.

My first day was jarring. It felt odd not wearing a uniform, and no one was forced to talk to me. There were so many kids, and I had to put in effort to make friends. Fortunately, I found a wonderful group and slowly entered their ranks. Then I started to get bullied at school. My group of friends stood up for me when they could, but my classes spent alone were tough. I internalized every hurtful word, and I could not stop myself from doing it.

Then the worst month of my life arrived. It was the middle of November, and none of my family members were answering my calls or texts. My mom came through the door super late, looked at me and told me my grandmother had died. My grandmother meant the world to me. She was my best friend. Less than a week later, my father tells me that my grandfather, one of the most lovable men I have ever known, had died. At my grandfather’s wake, my sister had her first heart episode.

In two weeks, two members of my family had died and my sister was diagnosed with a congenital heart condition. My brain chemistry changed so vigorously I was no longer conscience of my actions. For months, I would wake up sobbing then go back to sleep. I couldn’t go to school. I had a panic attack any time I set a foot through the door. There were multiple suicide attempts, and my life felt over. There was no use to living. I had no one to live for.

My observant mother knew something was wrong. She was handling her mother’s death better than I was. She took me to multiple therapists and psychologists, all of whom were shocked at my mental state. Nobody knew what was wrong. We tried everything, and nothing was working.

After two years, I was diagnosed with OCD, generalized anxiety disorder, seasonal depression and panic disorder. The mix of these four things had been literally ruining my life. I was prescribed medication and, for the first time in two years, was beginning to live in reality. I had missed more than 100 days of school, cut off all of my friends, gained so much weight and lost control of every aspect of my life.

Slowly but surely, through intensive therapy and medication, I began to heal. I began to talk to my friends, and their support was so valuable. I even began making new friends who shared their struggles with mental illness. A friend told us about a mental health advocacy group called Into The Light. She told us about their work and how we could attend fundraisers for their program. I fell in love with their message. Mental health advocacy is their main initiative and a personal goal of mine as well.

My experiences were difficult and grueling. I truly believe if I had been educated sooner, I could have avoided a lot of the issues brought on by mental illness. I advise everyone to see a therapist. You don’t need a diagnosis to talk to one, and there is no reason why you shouldn’t. Mental health should be a priority to everyone! I urge you to learn more about yourself and your mental state. It will improve your self-health and your entire world view.

The best advice I could give is to take care of yourself. I hate to use this horrible metaphor, but there is a reason you should put your oxygen mask on first. You cannot help anyone else if you are in a bad place. If you are in need of someone to talk to someone, consult PsychologyToday.com. It lists all your local therapists and psychologists. If you are in dire need and feel you may be a danger to yourself or others, please waste no time and contact the National Suicide Prevention Hotline at 1-800-273-8255.

Drew Eldridge is an 18-year-old freshman at Brookdale Community College, studying comedic writing for the stage and screen. Though he is pursuing a career that will bring merriment, Drew’s life was not always full of laughter. He grappled with depression, bullying and ultimately thoughts of suicide. In this busy holiday season, please remember there are people who may not be as happy as they appear. Take the time to watch your friends and give them a safe place where they can open up. If you begin to feel overwhelmed or lost, you don’t have to go it alone. There are many people who can help, from therapists, to counselors and people who really care about you. After a lot of hard work, Drew overcame his challenges and wants you to know you can too.

This story was originally published on TheJournalNJ.com.