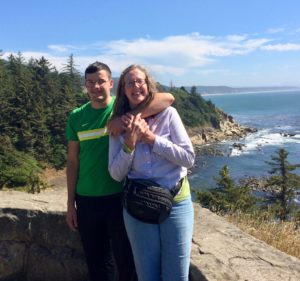 Life is an amazing journey. Growing up, I didn’t really think much about mental illness, and when I did, it was in relation to “other” people. I did know that one of my grandfathers had been an alcoholic, and that one of my grandmothers had suffered from something called manic depression, but I didn’t fully understand what that meant, and it certainly wasn’t a part of my day-to-day life, at least on the surface.

In my 20’s and 30’s, I started to have a deeper understanding of mental illness. I was married to someone who suffered from addiction problems, and my mother and law (who I still love dearly and refer to as my Cuban mother) taught me firsthand what it meant to have and to overcome a whole host of mental issues, from addiction to paranoid schizophrenia. I went with my husband and my mother-in-law to 12 step meetings, and also went to therapy for the first time in my life. I went into those sessions embarrassed and self-conscious. I was was the type of person that got my sense of self-worth from my achievements, and I thought that going to therapy was something to be ashamed of. However, I came out of them with a totally different mindset. Looking back, it’s hard to believe I ever felt that way! Now I strongly believe therapy is wonderful, and I wish more people had access to it.

So, I went on with my life. We had a baby, Elliot. My husband and I got divorced. I met the love of my life, Gary, and we got married. My son went off to college, and Gary and I moved to Oregon. It was a good move! 🙂

Fast forward to December of 2015, just before the my first Christmas here at Unity of the Valley. One very early Sunday morning, I got a terrible phone call. My precious and beloved 19 year old son, a physics major at Rutgers University, had had a mental breakdown, and had to be hospitalized. The official diagnosis was that he had suffered from a bipolar episode. I will never forget the worry, helplessness and devastation I felt that Sunday morning. I will also never forget the love and support I received from the music team, the ministers, the prayer team, and my friends here at Unity. I somehow got through the service, and was able to fly to NJ for a few days. By the time I got there, Elliot was already doing better. The time we spent together was intimate and healing, and I was able to return to Oregon for our Christmas Eve service. It was an absolutely gut wrenching experience, as I’m sure you can imagine. Moving forward, Elliot, his father and I began a long journey of discovery and treatment. I’m happy to say that with lots of love, communication, therapy and appropriate medications, my son is now thriving again.

I asked Elliot if he’d like to contribute anything to this talk today. He thought for a moment, then said: There is no concrete line separating people with mental illness from “normal” people. Everyone suffers highs and lows, feelings of worry, feelings of depression, feelings of anxiety. People that have been diagnosed with a mental illness are having more extreme experiences of these universal feelings, they are simply further along on the spectrum.

Fast forward again, this time to April of 2016. My friend and former neighbor Phil Mazzini, the husband of one of my closest friends, Yannah, the father of two of my wonderful piano students, Artemis and Sophia, a loving, friendly and extremely successful man, took his life. Phil was a highly functioning, super productive person, who liked being outside, liked dancing, liked people. Very few people knew that everyday he quietly waged a war with depression. He didn’t want to burden anyone with his struggle. His death came as a shock to the community. Now his wife and daughters are working hard to spread the word that it’s OK to reach out for help.

The grief after Phil’s death was unfathomable. And, on top of that was added the stigma around suicide. The daughters felt terrible that people were making up stories that their dad had died of a heart attack in the woods. They wanted to be honest, and to speak openly about their father’s illness. Instead of feeling ashamed, they wanted to do something to raise awareness that depression is an illness, just as real as cancer or other illnesses.

Sophia, now a student at Rutgers, recalled sitting in class one day where a fellow student called killing yourself “the most self-centered thing you could do.” The Mazzini’s see it differently. A therapist told them their Dad lived with a 100-degree fever his whole life. Then one day it became 103 degrees. Then, on the day he killed himself, he woke up that morning and it was 105. And his body couldn’t take it anymore.

And so the Mazzini sisters decided to do something brave: They decided to speak publicly about their father’s suicide. With their mother, they started the “Into the Light” foundation, to rid the stigma around mental health issues, to help at-risk individuals to feel safe and supported, and to encourage them to seek help. “Into the Light,” is about more than just suicide; it’s about shedding light on all mental illness and struggles.

As soon as they started organizing this, they were amazed at how many people came up to them and thanked them, and said, ‘I’ve been struggling, too.’ They had no idea how many people are out there and are struggling every day with mental pain.

Just 5 months after Phil’s death, they organized a 5K run/walk, with the hopes of raising $5000. Much to their amazement, over 1000 people participated, and they raised more than $80,000! They are in the process of planning future events, and hoping to open chapters of Into the Light at colleges throughout the US. They sent us t-shirts and bracelets, which are available in the foyer. The items are free, but donations are also appreciated.

As I was preparing this talk, it seemed that everywhere I turned, another radio program, newspaper article or internet video surfaced, dealing with the subject of mental illness. One that touched me deeply was from the rock artist Johhny Crowder (singer with his bands Dark Sermon and Prison). I’d like to share some of his words with you:

People shouldn’t have to ‘admit’ That they’re depressed. An admission implies fault or wrong doing. No diagnosis, no label, no category, no list, no medication, no doctor, has the power to pigeon hole or limit me. I know who I am, I’m just tired of hiding.
I am mentally ill, and I don’t care if the whole world knows it.
In fact, I hope the whole world hears. I’m not scared of labels anymore. They don’t define me. They can’t.

Everyone knows someone who lives with mental illness, and we need to get to a point in society where we can openly talk about these things as a community.

And so now we come to the real point of this talk:
What can we as individuals and as a community do to help?

In some ways, there are no easy answers. But in another way, the answer is
simple: Go be love.

Being able to feel safe with other people is probably the single most important aspect of mental health; safe connections are fundamental to meaningful and satisfying lives.”

Herein, I believe, lies the answer. We can open our hearts and our minds to connect with those around us. Don’t be afraid of mental illness. Seek to understand. Don’t let someone’s diagnosis of a mental problem define that person in your eyes. Look beyond, and see the inner light. Look beyond, and feel the connection of spirit with that person.

Even that person living on the streets that seems to out of their mind was once an innocent and trusting child. We don’t know what trauma they’ve lived through. We can’t solve their problems, but we can see that inner divine spark, and look them in the eyes, smile, and send them our love.

And if you feel afraid, if you don’t know what to say or do, close your eyes and go within. Open your heart and mind to the quiet voice of spirit, and guidance will be given.

The author and blogger Rachel Mary Stafford leads us through this process:

Go be love … but first, get quiet.

When the world is off kilter, we must restore balance within ourselves. Using our hearts as our guide is how we find our way out of the dark, going to places where pain resides, saying things we didn’t know we knew, and doing things we didn’t think we had the courage to do.

That is when we get the opportunity to pick someone’s heart up off the floor … and ours right along with it.

And so, if I could leave you with just two ideas from this talk, they would be this:
Do not be afraid of mental illness; instead, see and feel that we are all connected
and
GO BE LOVE…

– A Talk given at Unity of the Valley in Eugene, Oregon, on May 27, 2018.
The theme that month was:  “Staying Afloat in Rough Seas”.
It was part 2 of a series titled: “Finding Light in the Shadows”
and it’s title is “Turning Stigma Into Hope”